On the 15th August this year, India will be celebrating the 75th Anniversary of her independence from British Imperialism. It is a day for celebrations but also a day when we should recapitulate and remember the contribution of those who gave their lives so that India could be free from foreign yoke.

Time and again it has been propagated that India won her independence through non-violence and non-cooperation methods. Nothing could be farther from the truth. Since 1857 when the first war of Independence was launched, there have been several movements both non-violent and violent that accompanied the freedom struggle. It would be well-nigh impossible to cover all these uprisings in this short introductory note. We have therefore chosen three of the most outstanding personalities in the Indian Freedom movement, namely Bal Gangadhar Tilak, Mohandas Karamchand Gandhi and Subhas Chandra Bose. All three of them were basically Indian – they represented Indian cultural tradition. A study of these three personalities in effect will result in the study of the entire Indian Freedom movement. Tilak was a revolutionary, Gandhi a man of the masses, and Bose was a revolutionary as well as a man of the people.

Forcibly disarmed by the British after 1857 and subjected to terror and brutality, the Indian people lay prostrate for a while – but with the birth of the Indian National Congress in 1885, there came a new awakening. From 1885 until the end of the first world war, the Indian people in their endeavour to recover their lost liberty, tried all possible methods – namely agitation and propaganda, boycott of British goods, sabotage and finally armed revolution. This was the time when Tilak came to the forefront.

Aurobindo Ghosh, another prominent figure in the nationalist movement, wrote an article on Tilak in the paper Bande Mataram, on December 26, 1906, prior to a session of the Indian National Congress. He wrote, “….from Mr. Tilak we expect no great speech and no sensational pronouncement, his very presence is more powerful than the greatest declamations; for it is not as an orator he stands prominent in spite of his clear incisive utterances, nor as a writer in spite of the immense influence which as the editor of the Kesari he exercises on the political ideal of Maharashtra, but as the man who knows what has to be done and does it, knows what has to be organised and organises it, knows what has to be resisted and resists it. He is pre-eminently the man who acts, and action is to be the note of our future political energies.“

The first world war ended in 1918. In 1919 there was the massacre in Jalianwala Bag in Amritsar. In 1920 India stood at one of the cross-roads of history. Politics of constitutional agitation was discredited. Armed revolution for India’s independence was impossible. After his long imprisonment in Burmese prison Tilak died. India needed a new leader and a new weapon of struggle. It is at this historic moment Mahatma Gandhi emerged with his weapon of non-violent non- cooperation. For the first time in Indian history Gandhi was able to draw vast masses of the Indian people into the freedom struggle. No political leader anywhere in the world has ever practised passive resistance on so vast a scale. What Tolstoy preached, Gandhi applied to the politics of our country. He, therefore, emerged as the undisputed leader of the Indian people.

But Gandhi’s movement had serious limitations. In spite of three civil disobedience movements, Gandhi was not able to affect the loyalty of the British Indian Army to the British ruling power. It is only when Netaji Subhas Chandra Bose and the Indian National Army (INA) under his leadership launched their final onslaught on British Imperialism at the Indo-Burma frontier that the British Empire in India was shaken to its very foundations. Colonel Shaukat Ali Malik hoisted the Tricolour on Indian soil in Moirang on 14th April 1944.  Thereafter, INA suffered a military defeat, but it is the fight of the Indian National Army and ultimately the trial of I.N.A officers in the Red Fort in Delhi that completely destroyed the loyalty of the British Indian Army towards the British Government in India. Britain left India because it no longer had the military power to hold on. 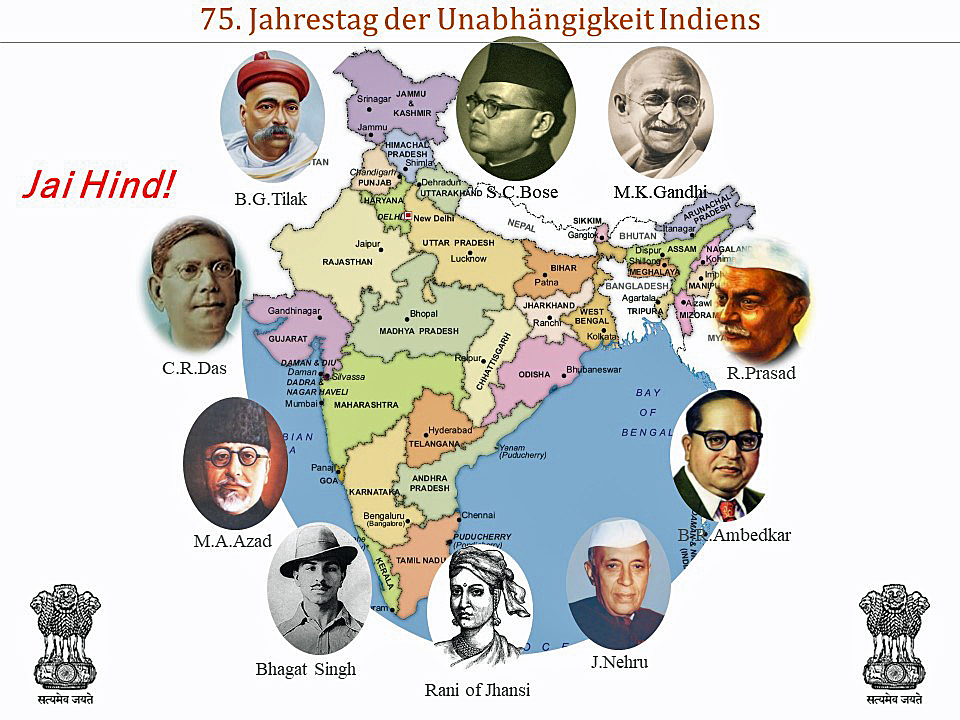